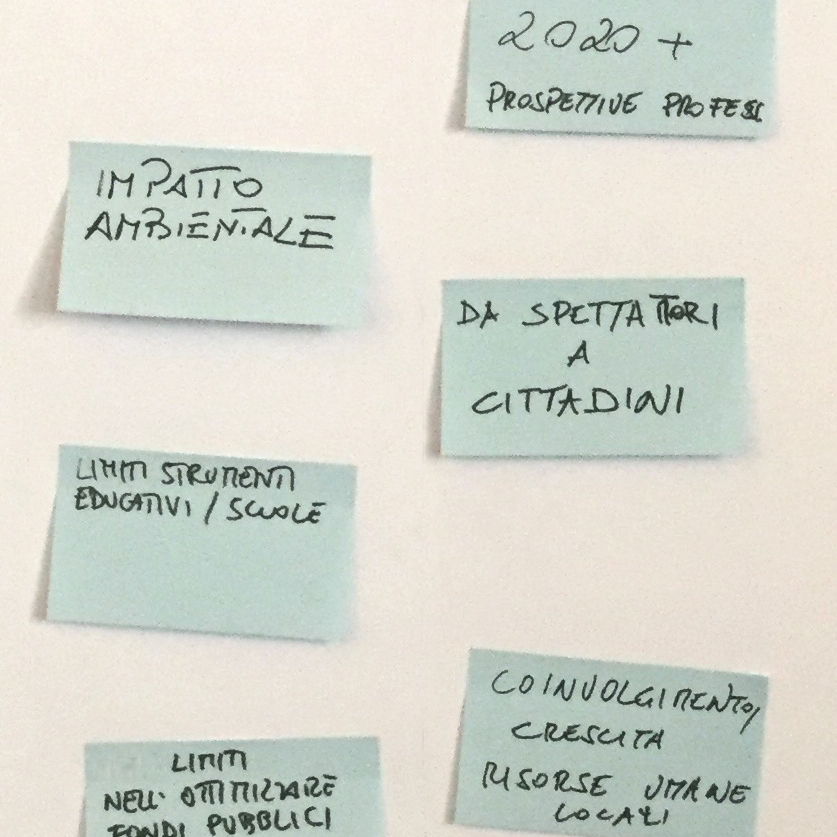 The fourth workshop for our thirty-one project leaders was held on the 25th and 26th September at the Foundation “Sassi” in Matera.
The “co-creation” phase is coming to completion. The project leaders have acquired the necessary know-how and exchanged ideas to improve the quality of their projects. Concurrently, Ariane Bieou, the Cultural Manager, with the assistance of Agostino Riitano, Ida Leone and other collaborators, has had the possibility to coordinate and monitor progress as well as to evaluate critical issues and potentials.
We have to imagine the work progressing on two levels:
- vertical: each project leader develops his/her own project;
- horizontal: project leaders follow directives and insights given by the Cultural Manager based on the criticalities and the themes that individuals have in common.

Everyone has to preserve his/her own identity and at the same time be able to work in a team; for this reason six categories have been identified during past workshops, namely six thematic areas that will be real working groups for our project leaders.

When creating the categories we looked for the lowest common denominator relying on the possible grouping hypotheses: having a label or trademark allows for fast recognition. Currently, the projects are based on six key themes: shame, archaicity, accessibility, slow crossing, food community and heritage as a stage.
A seventh category has been imagined around the theme of cinema, but it has not yet been developed since we want to keep all the themes hybrid and not set on a single specific art; in any case it would focus on the challenges to be faced when producing a film in Basilicata compared to other contexts.
Each category will become a working group that will be offered training opportunities: Project Leaders will be able to participate in more than one group and will be given the opportunity to liaise with philosophers who will bring useful content that will cement the label of each category; these philosophers will not be coordinators but sources of inspiration, in fact each group’s activity will never be verticalized, but will remain horizontal, because the challenge is preserving the identities of the individual projects while working together.
Bearing in mind this binary vertical\horizontal track, some management tools were illustrated to the project leaders to help them recognize the criticalities of their ongoing work and meet the intermediate deadlines needed to reach their objective.
A project design that does not detect threats is a naive design; if a dialectical method within the various teams is not nurtured, a valid strategy cannot be implemented to mitigate or even overcome difficulties. During the first part of the workshop Ariane Bieou illustrated how European co-production works, or in other words that tool created in Europe to fund projects linked to the arts sector as well as to create a living cultural production network.
Using the four-year IN SITU model (European Platform for Artistic Creation in Public Space) Ariane explained which characteristics a co-production project must have (obtain the consensus of the majority of partners, be scalable, be representative of the project itself, be diversified, namely be used in live performances, installations, etc.) and how funding is allocated (50% by partners and 50% by the European Commission).
In Italy, we have not been producing for the last 15 years. It is for this reason that we are no longer used to the logic behind which producers can benefit from new creations rather than being held in the distributor’s check. Nowadays, thanks to multidisciplinary productions it is easy to build an extensive network of partners.
Nowit is the time to act and to have both an economic and reputational return.
The choice of partners is fundamental to create a network that is as European as possible, which is what the Commission expects. It is exactly for this reason that Ida Leone, together with Francesco PiersoftPaolicelli’s technical assistance and the contribution of the various project leaders, is seeing to the creation of an interactive partnership map, where it is possible to register all the partners of the thirty-one projects that are being developed.
Every single organization must focus on its position in order to understand which are the right partners in a development phase. This is the reason why we involved Materahub represented by Raffaele Vitulliwho urges completing a questionnaire on project and management sustainability,so that every organization becomes aware of its own critical issues and may avoid solving problems ex post.
Ariane asked the project leaders to be rather honest and describe the actual state of affairs when writing the drafts. Within partnerships it is important to keep the number of partners under control and to have partners that count and are indispensable for the project; it is important not to bind the funding request to the intrinsic value of the project by itself, as there is no recognition to be sought, but rather an objective to be reached considering that the project had already been selected.

The workshop continued on the26th with the presentation of two very special guests: Chiara Montanari, expert in managing groups and complex situations under stressful conditions, Dino Amenduni, expert in storytelling and institutional communication.
Civil engineer by education, interface manager by chance, shipment manager in Antarctica by choice: this is the briefest summary of Chiara Montanari’s experience.During her talk to the project leaders she compares today's world to Antarctica, where even the highest qualifications do not matter if you are not ready to face the unexpected. Chiara coordinates a heterogeneous group of people with different experiences and varied educational backgrounds: there is not only language, age or religion to distinguish the various members of her team, but the military training of some against the scientific studies of others. A real pirate ship! Being the leader of such a multicultural and multidisciplinary group means managing many objectives in a short period of time and with the unexpected as a constant.

The Project Leader has to accomplish the project.
Therefore, the Project Leader needs the crucial collaboration of a team that respect and listen to him/her.
A conflict can arise from a misunderstanding, different perspectives, divergence of opinions or limited resources: each individual holds a piece of truth and should not be ignored.A conflict simply removed but not addressed is the sword of Damocles hanging over the team and the projectalike. For this reason, a Project Leader must avoid judgments; in such moments he/she must focus his attention on the subject rather than on the individual; he/she must avoid excuses and aim at achieving the objective.
If a project ends, it is not a drama, the important thing is to realise it in time in order to avoid wasting resources that could be valuable for a different project, a project that may be better than the first one.
Making mistakes is natural, but you must not lose credibility otherwise you will no longer be supported by your team.
In a situation that changes, the project leader certainly does not jump for joy, but by taking a step back he/she can acquire a more objective vision and identify the problems that he could not recognise from within.
Resiliency in project management is the strategic capability to adapt to changing conditions: do not resist, otherwise you risk breakdown, but you must find an alternative way to pursue the objective.
So the keyword is mind-set: there are no problems, only opportunities. With a good project design and a lot of individual and collective responsibility, anything can be handled, even in the most extreme situations - it is not by chance that space agencies are studying missions in Antarctica in order to better prepare their own -.
Dino Amenduni, partner of the Proforma communications agency, expert in political communication and strategic planning, along with our project leaders analysed, through practical examples, how the world of communication has evolved and what can be the flaws in drafting a communication strategy based on storytelling. For example, hedwelt on the studies of Kahneman, a psychologist and decision-making expert, who maintains that 98% of human behaviour is determined by the intuitive and non-rational cognitive system. He also explained that the choice of narration as a communicative strategy can be a winning approach considering that from an early age we are used to storytelling and its suggestions as a means of acquiring information.
From Renzi taking office at Palazzo Chigi in 2014, to the Trump effect on today's rules of institutional communication, to Emiliano’s electoral campaign for the 2009 local elections in Bari, Dino Amenduni has demonstrated that, depending on the message that we want to transmit, using the figure of a political leader can have pros and cons; moreover, in order to get to the recipient of our campaign we have to use the language and channels of the recipient we want to reach.
The institutional communicator has the right to use multimedia technologies, involve citizens, personalize communication, use different registers, innovate, hybridize styles, but he also has the duty to make himself understood, use preferred channels, provide accessible information, use existing meaning contexts and tell the truth.
The workshop ended with a meeting between the Foundation, the Project Leaders and the members of the monitoring panel Cristina Farinha and Gerald Colleaux.
The discussion with the panel members highlighted that the Foundation seeks to achieve the objectives of the bidbook by examining what Matera can offer Europe and viceversa. However, the Commission expects the programme concept to bet on its European dimension, on building bridges and links with Europe within a perspective of identity sharing and on culture as a tool for the development of the city in a perspective of exchange and learning.
The activities are in full swing. Matera 2019 is a beautiful journey of a thousand faces that needs the support of the whole community to become reality: our greatest satisfaction will not be the accomplishment of the projects but rather their impact on our local and really European community.