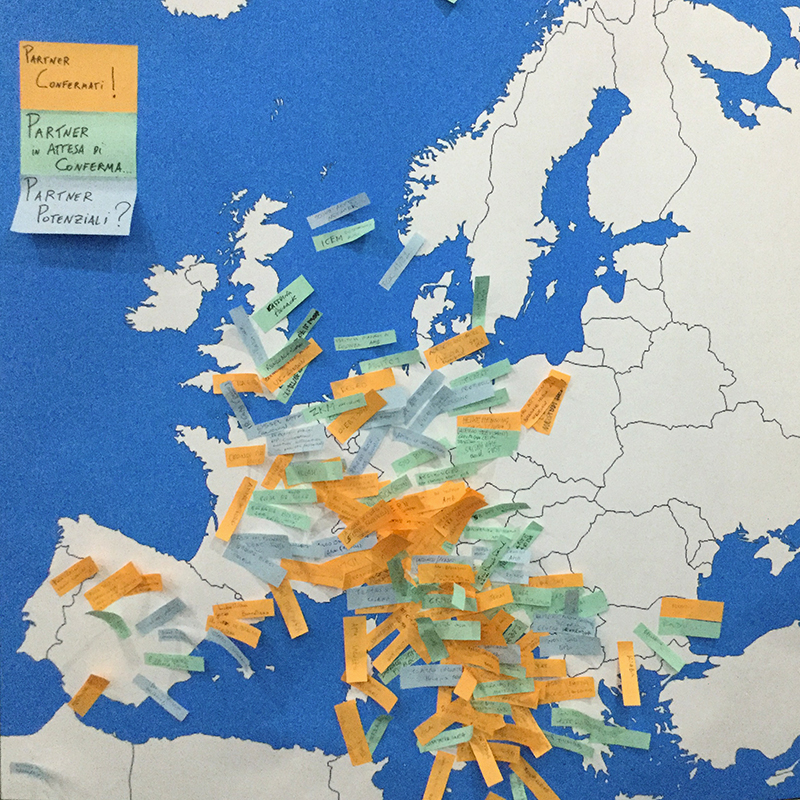 A volunteer from the Matera 2019 web team will attend each event dedicated to the co-creation process, both to participate closely in the production of the Matera 2019 cultural programme and to write-up an account that will be made available to everyone. This week was Mimino Ricciardi’s turn. Happy reading ;)

The Sassi Foundation hosted the second co-creation workshop with the 31 Project Leaders that have been commissioned with the development of various projects from the OpenFuture bid book. A two-day workshop held on 10th-11th July which focused on the artistic dimension during which the participants had the opportunity to perfect the evaluated projects.

We started off with a synthesis of the work done in the previous workshop and the presentation of the agenda highlighting that the aim is co-creation and therefore all participants must play an active role to ensure the projects’ structure reflects the same spirit with which this journey has been undertaken. It is at this stage that an identity card is built for each project and it must be in total harmony with the larger "Matera 2019" programme, a common rhythm, a feeling part of something bigger that goes beyond the project you are leading. The task is to capture a contamination of ideas and visions that form an intellectually interesting magma.

All project leaders were asked to present their projects to the other participants using the elevator pitch method: 3 slides in 3 minutes. An hourglass to mark the time and emotions to signal the effectiveness of a strategic communication which in the future will have to deal with potential social and economic partners.

At the end of the first day contracts were signed and Director Paolo Verri expressly stated that the contract, in addition to being a formal fulfilment, is a hand shake to strengthen the social and cultural network, to give new impetus knowing that each person’s work is important but not sufficient individually for the overall Matera Capital of Culture project.

The second day began with a communication workshop on co-creation projects that was held Raffaella Pontrandolfi. It focused on defining the vision and actions in such a way that the communication of the various projects can be as homogeneous as possible, in knowing that each project is going live and therefore the feeling of playing an essential role must be communicated from the description of the soul of the project itself. A first approach will be the daily reports that TRM – the local broadcast company - will produce in August, giving brief summaries on individual projects by interviewing all the project leaders. The focus on communication concludes by defining that some basic principles will have to be taken into account such as being part of a single team and enhancing everyone's work. Part of this strategy is the involvement of the Matera 2019 web team, which will have the task of telling the workshop phase of the co-creation process. To this end, hashtag # coMatera2019 has been launched, which will be used throughout the communication strategy.

Mid-morning, the participants were divided into 4 groups, with each one researching other best practices to discern stimuli, connections, possibilities for collaboration and network activation.

The first group looked into architecture, public space and landscape; the second dealt with theatre, dance and performance; the third with communities, installations and gamification; the fourth and final group focused on music, crossmedia and cinema. After the lunch break, the same groups followed up with Skype calls with critic and independent curator Katia Anguelova; the artistic director of Gamelab Agency Nicolas Rosette; the director of Caos Linda Di Pietro; the hacker and interaction designer Salvatore Iaconesi and the writer Oriana Persico. A strong motivation for interconnection resulted from the Skype calls, with each speaker and group demonstrating a significant desire to keep in touch in the future.

Before the closing remarks, in the plenary session each group presented a report, summarizing the sharing experience of their best practice analysis and insights derived from each one, keeping in mind also the opinions of the Skype call speakers.

The result was a less abstract workshop, where each participant shared his/her capabilities with the rest of the team using his/her own language. Everything has begun to take shape: language, motivation and peculiarities will have to become a method by trying to find connections between the projects; sharing convergences and implementing modular projects so as not to exclude any means to set a course towards the 2019 schedule.

There is a general background rhythm towards the Matera project, where experimentation will have to be decisive for it to become a point of reference even years after 2019. These are cultural opportunity workshops. It is time to understand that you are all participants of a model that has to go beyond 2019 and that there can be no excuses of any kind. Co-creation is the sustainable path towards networking and acting in an "open future" mode. The next workshop is scheduled on Monday 17th and Tuesday 18th July.