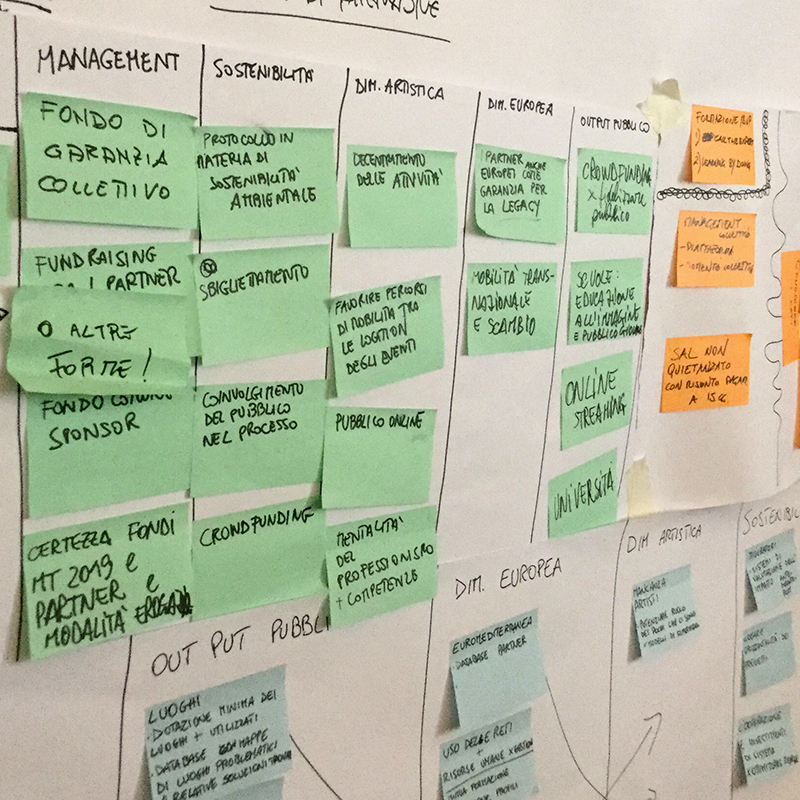 62 participants on the first day, 31 on the second, 20 pads of used Post-it notes, 10 metres of A2 paper sheets laid out, 10 dried out marker pens, numerous litres of water drunk to combat African heat: these are the numbers of the first co-creative workshop starring 31 Project Leaders, selected following a Matera – Basilicata 2019 Foundation Public Tender to design and develop 20 of the 50 plus projects of the winning bid book.

The workshop, which was held at Le Monacelle on 26th and 27th June, was conducted by Ariane Bieou, the Foundation's cultural manager, Augustine Riitano, expert consultant in cultural policies and co-author of many of the bid book’s chapters, and Ida Leone, head of the Build Up programme, which aims to develop a collective skills and knowledge capacity building of Matera and the Basilicata region’scultural system and ecosystem in view of the auspicious 2019.

First we tackled the criticalities: present also in the design ideas of the Project Leaders that won the tender, those regarding the culture system in the broad sense, and specific ones perceived by individuals. European dimension, artistic dimension, management, production of outputs for an audience, productive sustainability: a work of dissection, aimed at seeking solutions, collectively, discussing in plenary sessions and in (non)homogeneous groups in which to look for affinity and differences between ways of managing cultural programming, ways of understanding frugality and sustainability, ways to tackle problems regarding cash flow, insufficient, inadequate and controversial audiences, the ever present bureaucracy that often hinders the realization of cultural projects, even for 2019.

An intense and fruitful effort, which will be of great help in the preparation of the next workshops, scheduled for the 10th-11th July, the 17th-18thJuly, and the 5th-6thSeptember (also in the works a collective camp, a sort of cloistered workshop in which even meals and leisure and relaxation moments will be collective). The goal is to have by the 24th of October an extensive executive design developed from the comparisons and work done together. On that date, a new public notice will select the best executive projects in which to invest the Foundation’s resources. 2018 will see their implementation and readiness to be inserted in the 2019 planning.

In the meantime, two vouchers, respectively of 2,000 and 2,019 Euros, to be spent immediately in order to acquire the necessary skilled services to assist in the writing of the project and for the Project Leadersto “go&see”: to actively participate in Italian and - better yet – European events and exhibitions, from which to get inspiration, strike partnerships and enlarge the network.

Much, much work lies ahead. But going back now would be unthinkable.