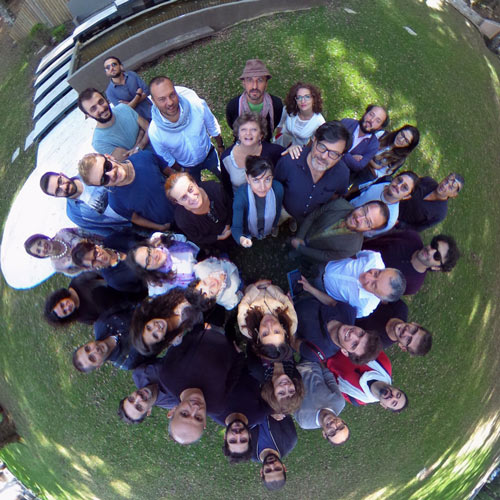 The camp of project leader

The road leading to Rifreddo, which reaches a height of 1,174 metres at the pass, is a path towards meditation. Imagine a place of wonder, surrounded by silence, almost completely isolated. Imagine 31 Project Leaders who represent almost the whole artistic, cultural, musical and production sectors of Basilicata. Imagine that the conductors are Ariane Bieou,the Foundation's cultural manager, Agostino Riitano, expert in cultural policies, and Ida Leone, head of the Build Up programme. Close the doors, the windows and any possible escape route for four days! Mix everything together with authorized external incursions of experts, facilitators and energizers, and the result is the Camp for Project Leaders.

Four days of co-creation, four days to move from project ideas to real executive projects. Four days to realize that there is so much more in a project beyond the initial idea.
You need reliable partners and networks. You need to know who your recipientsand your audience are.You need to identify the location, how and when your event will take place and in the end, only in the end, you need the money. Paolo Verriis in charge of opening the Camp and he immediately overturnsour perspective.
Paolo Verri stresses that Matera 2019 does not mean funding. Matera 2019 is not a Public Body issuingcalls. Should there beany expectations, these must NOT be economic.
Matera 2019 is a large, lively, challenging, serious path for collective cultural growth. Co-creation is actually much more than a simple accelerator for project planning. It is a method to be learned, to be repeated, a strength that goes beyond the projects. We must not only focus on the single project, but plan the organization of a lifespan that moves towards 2019 and that must continue after this date.
Matera 2019 is the dream we are all called to contribute to in order to make it come true. This dream is the world as we would like it to be: supportive, cohesive and open.

It is something like the IETMnetwork Elena De Federico tells us about.A network of independent international artists, which is futuristic, visionary and real at the same time. In IETM all minorities have the equal right to speak and all artists, even the least popular or the ones who have been working for only three years, have the same speaking rights asthegreatest Festival directors.

The values of IETM are: equality, informality, curiosity and solidarity, the same values that can be applied to a network. We must, however, pay attention to one of these values, that is informality. When it is excessive, informality can lead to misunderstandings and diminished value. IETM is a metaphor for the task that Matera 2019 must accomplish: to bring Matera into Europe with itsbackground of millenary values.

These four days can be defined with an adjective: circular, because of the circular exchange of ideas and human connectionsthat took place. In the meetings even the seats were arranged in a circle to encourage such a process that must lead to the "Ithink /we thinkcircular". Therefore, a new awareness must be raised about the importance ofsetting up networks where each hub must act as a multiplier of ideas, skills and values. A network that must be experienced (netliving) in order to be successful.
An element that is often missing in the process of project planning ornetwork creation is curiosity,as reminded by Ariane Bieou. Most of the timeEuropean projects lack partnerships with Northern and Eastern European countries, which are characterized by innovative art forms and methodologies and could add value to many projects.
MateraHUb make dreams come true.
The Materahub spaceship is cheerful and colourful. The 31 Project Leaders are involved by the consultants in team games and Energizers to reawaken and be alert, but then things get serious. Materahub is a consortium that operates internationally and supports businesses, start-ups and would-be entrepreneurs, institutions and organisations through European projects.
The watchword at the CAMP on Thursday and Friday is: fill out your Canvas. It is a tool that helps design and visualize a project, supports the development of a shared vision and allows both to improve the communication of the project team and to get a general overview of the project. It is a very simple, intuitive and free template for project management.
Filling out the Canvas helps have under control the Audience (people we are addressing) and the sustainability of the whole project. It is also helpful to stick to the aims of the bid book, as well as to make the connections among the various projects visible.
A valuable recommendation was made by Vincenzo Cavaliere, music producer, who deals with calls and procurements at the Auditorium ‘Parco dellaMusica’ in Rome. He suggested to break down an idea as much as possible in the endeavor to implement it. In this way every possible action can be easily identified along with any tiny sustainable element that may change an idea into a projecttaking into account the given budget, its variabilityand a good planning.
The Canvas, which is definitely auseful tool, was not the only activity of the CAMP.
During the last two days one-to-one meetings between project designers, the Foundation and Materahub were heldin order toaccomplish the preliminary projects.
All the recommendationsmade by Agostino Riitano, Romaniello, Cavaliere, Vincenzo Caruso and Linda di Pietro did not go unheeded: the importance of bearing in mind even the smallest detail, of fixing appropriate deadlines and of sharing a communication strategy. If you want to generate experiences and break patterns, to think big and make it simple, to take these actions as a lever to long-term initiatives, you must not be totally focused on your own project, otherwise you will not enjoy the cheerful context around it.
The most interesting experiment was the exchange, the knowledge and the shared items among all the projects submitted by the Project Leaders. The challenge was to turn 31 associations and cultural businesses into a cohesive group pursuing the same goal.