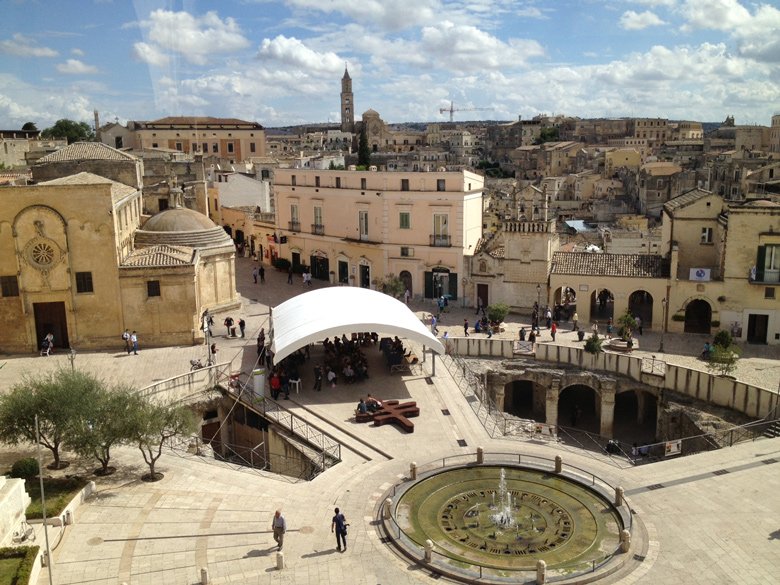 Let's start from the end: Francesco Rosi that enchants us with his stories of decades of Italian cinema history, much of it passed through his films: his visceral relationship with Matera ("a city that is in my heart"), stories of actors and impossible locations. Before him, Ascanio Celestini had kept us pinned with his stories surreal and always at the end bitter, in which man always loses, crushed by huge, uncontrollable forces .

We also say that Materadio, now in its third edition, is a polycentric and choral event, which is difficult to follow everywhere, accounting everything. Materani know this and are able to differentiate their interests so that they can be, every year more than before, everywhere. Many people i.e. followed in the afternoon, under the tent of Piazza Vittorio Veneto, the stories of women in L'Aquila narrated by Ilaria Iacoviello. "Women who do not tremble," photo - by Giampiero Corelli - and interviews with those who have survived 23 hours under the rubble, who has started again, who, sadly, has surrendered.

During broadcasting of Farenheit, the heart of the day on RadioTre, Marino Sinibaldi interviewed directors of some of the cities eligible to become European Capital of Culture for 2019: Perugia, Pisa, Syracuse, Matera. With two other special speakers: prof. Montanari, author of "Unfinished Constitution," which reminded us that our century is that in which reverses the concept that artistic productions is paid by all (through a relentless taxation) but they are then viewed comfortably by very few (the aristocratic élite customer); and Oscar Farinetti, the creator of Eataly, which before ruthlessly dismantles the claims of the candidacies described above, and then reminds us to always put - how did Eataly - the man in the heart of our projects.