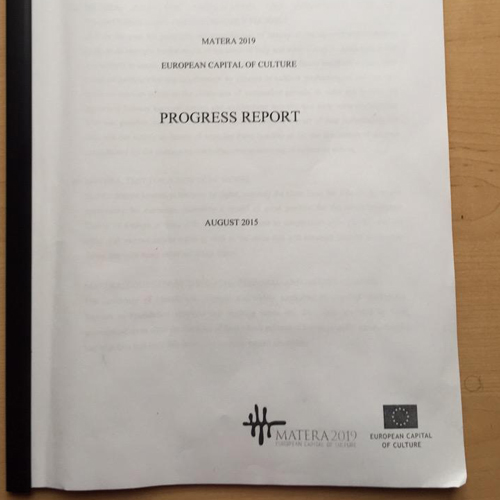 Yesterday at the office of the European Commission of the DG of Education and Culture in Brussels, the Matera 2019 delegation, consisting of the Mayor and President of the Foundation Raffaello de Ruggieri, the Director General Paolo Verri, the Development and Relations Manager Rossella Tarantino and Antonio Nicoletti, Mayor's staff member responsible for the town's strategic projects, met the members of the Commission for Culture Monitoring Panel presided over by Ulrich Fuchs, already director of Linz 2009 and Marseilles 2013.

The meeting had three great moments: the presentation of the activities under way and what the Foundation has done from October 2014 to date, the questions posed by the commission and the commission's recommendations for the coming year.

The Mayor opened the proceedings, referring to his first time in Brussels in 1969, when he came to talk about the first research carried out on the city and said that he therefore feels at home.  He also spoke about being able to strengthen the Foundation with the added values of passion and experience, such as that matured over five years of presence within the higher council of cultural heritage. “After the Milan Expo and the Jubilee, Matera will host the next big national event, and the Government is well aware of this”.

Next was the speech by Fuchs, who congratulated the Mayor on his new position, remembering that “The choice of Matera was a very serious and well-informed one, made by the panel of judges, based not on the beauty of the city or on its patrimony, but on the future proposals contained in the innovative cultural projects described in the dossier, written up by qualified experts”. He also paid compliments to the choice of continuity in working with the team that led the candidacy and he then left ample time for questions from his colleagues on the Panel.

After having followed the detailed presentation made by Paolo Verri and completed by Rossella Tarantino and Antonio Nicoletti, curiosity was expressed relative to three topics: governance, budget and cultural programme. On the topic of governance, the ongoing research that will lead to the identification of the best possible management model by the end of November aroused some interest; as far as the budget was concerned, there were numerous questions on the search for sponsors and on timing relative to obtaining regional and national funding; lastly, regarding the programme, there was strong demand for an artistic leadership coherent with the proposals contained in the dossier.

At the end of the meeting, the main recommendation was to make sure that not even a minute is lost, to pursue the program outlined in the dossier, to work towards the entry of the National Government into the Foundation as soon as possible and to continue to strengthen the trust between the municipal administration and the Foundation.

“It has been a very stimulating meeting, maybe because it was very direct, concrete and without any formalities” the Mayor commented. This satisfaction was shared in full by the Director Paolo Verri.

While awaiting the next formal meeting, which will be held in October 2015, Ulrich Fuchs announced a visit by the Commission in the first months of the year. The report on the day will be drawn up by the Commission within one month.