Geography and history of a fragile Italy

As part of Matera 2019 there will be a large photography exhibition inspired by the tenth anniversary of the earthquake that devastated the city of L’Aquila on 6 April 2009. The display aims to create a space to reflect on the difficulties of dealing with the earthquake’s after-effects throughout the whole country.

It also touches on the country's noticeable vulnerability, demonstrated by earthquakes in 2016 and 2017 in central Italy, in addition to those of the last half century, from Belice in 1968 to that of Irpinia and Basilicata which struck on 23rd November 1980.

The exhibition is the next natural step for the notfor-profit project 'The State of Things. Geography and history in the wake of earthquake'. It represents the first display of social and documentary photography of the effects of earthquakes on Italy and was developed and curated by the journalist Antonio Di Giacomo.

It came into being from a desire not only to document the destructive aftermath of earthquakes, but also to guide and support the much needed restoration of an Italy left damaged by earthquakes.

The display begins with L’Aquila, the source of the project’s inspiration, and tells the story of the city’s revival, documenting the recovery of the city’s cultural heritage and its community’s capacity for resilience, at the same time as shining a light on the places where time has stood still since 2009. The exhibit continues in an equally striking manner showing the impact of the earthquakes that hit central Italy in 2016 and 2017, as well as in other areas of a fragile Italy which still bears scars. Altogether, the project is made up of more than a hundred photographs.

With nearly fifteen thousand images, compiled from hundreds of media reports, The State of Things is the result of the largest photography initiative never before seen in Italy.

The title of the display, 'Terrae Motus', was chosen to pay tribute to Lucio Amelio, arts patron and gallery director, who during the aftermath of the Irpinia earthquake on 23rd November 1980, commissioned the biggest Italian and international artists of the time to create works on the theme. These commissions were to give birth to the extraordinary 'Terrae Motus' collection, donated by Amelio to the State and today on display at the Royal Palace of Caserta.

The artwork is based on the belief that photographing the different parts of Italy marked by earthquakes shows that the country is cared for. As such, it is a practice that can’t and mustn’t stop. As Goethe teaches us, 'when you lose interest in anything, you also lose the memory for it'.

The only way to make sure memory is sustained and the country’s fragile heart doesn’t abandon all hope and flee, is to keep reminding ourselves of the state of things. 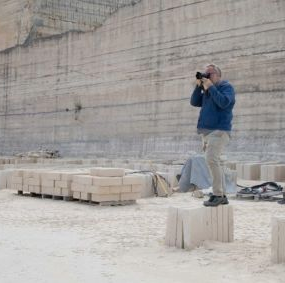