Suoni del Futuro Remoto (The Sounds of the Ancient Future)

Imagine a symphony orchestra composed of hundreds of elements:  kestrels, white tuff, the eddies of Gravina, the slopes of Murgia, expanses of wild mallow.  This is the story of Matera through the acoustic musical score of its places.

The natural sounds of the landscape of Murgia Park and the Sassi will be analysed, mapped, reworked in digital, to capture their most authentic voice and transform them into different languages, from music to artistic and sound installations, through live performances, field recordings and soundscaping (Collaudi Sonori).

'Suoni del Futuro Remoto' (Sounds of the Distant Future) takes a winding route through visual and sound installations that will invoke the most fascinating views of Matera.  Through sound and phonetics techniques, the project will create a community of Basilicata musicians and internationally renowned artists, winding through educational paths and live performances.  The development of a large concert score made up of natural sounds will be the end goal of the Onix Collective, with the participation of trumpeter Paolo Fresu. Directed by the musician Joe Johnson, the world premiere of the composition will be performed by a live orchestra as a tribute to the city of Matera, its places outside of the realms of time, its sounds, to the permanent and temporary inhabitants who will attend a unique and unrepeatable show. 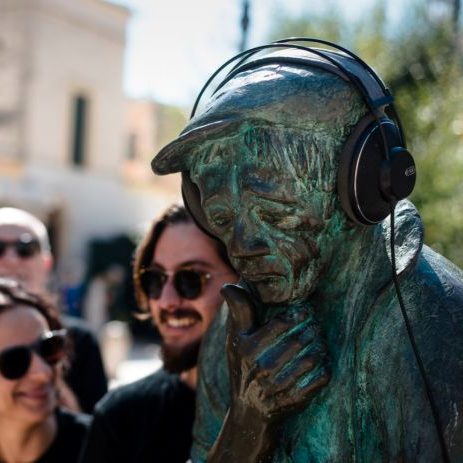