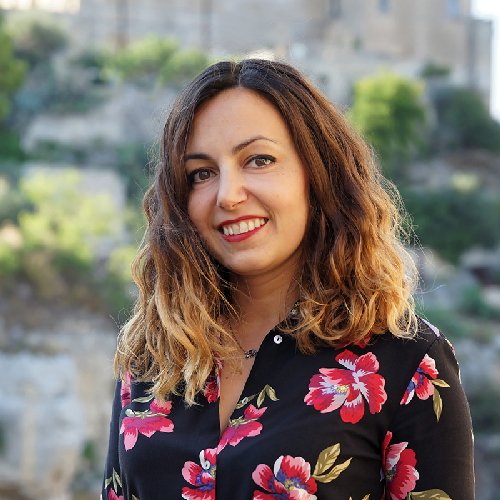 Elga Melucci was born in Muro Lucano near Potenza in 1986. She graduated in Advertising Communication from the University for foreigners in Perugia with an experimental thesis on non-conventional marketing in collaboration with the Wilton's Music Hall, that is the oldest theatre in London.

In 2013 she moved to Lisbon, where she worked for Microsoft in the multi-channel customer service area, and then to Bristol, where she was awarded a grant for an internship in marketing. Following these experiences abroad, she was granted the scholarship “Digital Excellence”, a project planned by Google and Unioncamere to promote the digitalization of small and medium-sized enterprises dealing with the Made in Italy agro-food products and craftsmanship.
In 2014 she decided to settle down and work in Matera, when the city was deeply involved in the candidacy process for the title of European Capital of Culture. She has joined the Matera 2019 webteam and has met highly-motivated people who shared with her their great enthusiasm in supporting the city’s candidacy project. During her stay in Matera she worked as a freelancer at the Chamber of Commerce of Matera, with a renowned local communication agency and as a teacher for a training course on web marketing addressed to SMEs organized by CNA Matera. Since December 2017 she has been proud and fond of working for Matera 2019.