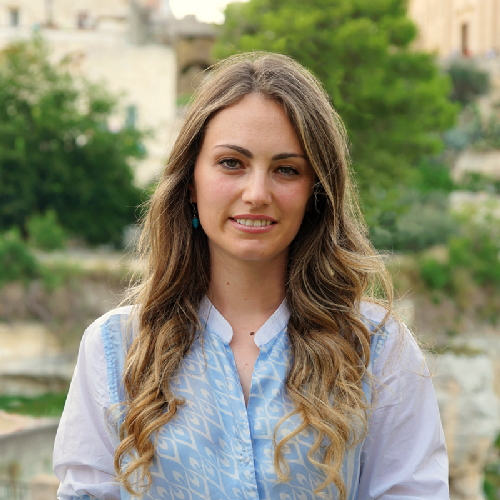 Carla Di Grazia has been responsible for the management and coordination of volunteers for Matera Basilicata 2019 Foundation since September 2018.
She was born in Potenza in 1985. She completed her scientific high school diploma at the G.Peano Institute in Marsico Nuovo (PZ) and gained a Masters Degree in the History of Art from La Sapienza University in Rome, specialising in History and Valorisation of Territory and Museums.  She has always been fascinated by the educational role art can play in the lives of people.  She completed an internship at Galleria Borghese and Galleria Corsini in Roma where she  was involved in educational projects targeting different audiences. Deeply interested in the connection between people and art in all its forms, she decided to hone her skills with a Masters in Museums, Galleries and Contemporary Cultures at the University of Westminster in London. At the same time she started working as volunteer, and later as a professional, in many prestigious museums and cultural institutions in London, including the Historical Royal Palaces, the National Portrait Gallery, the Victoria and Albert Museum, the British Museum, the Museum of London, the Southbank Centre and finally at the St George’s University Hospital, where she worked as curatorial assistant in the hospital's art department. Coming into contact with diverse groups of people, such as children, teens, adults and people with different economic and cultural background, she acquired significant organizational and interpersonal skills. At the National Portrait Gallery of London, she completed a six-month internship involving the management of educational activities for schools and families.
In 2013 she worked in customer services at Kensington Palace, and later became deputy leader of the Welcome Team. This role allowed her to acquire team leadership skills and to become a reference point for her team, the volunteers and the visitors. She believes that teamwork is crucial. Thanks to her professionalism and attention to detail, as well as to her passion for working with people,  she has received a number of awards.
In January 2018, she was selected as Linker for the Build Up process of the Matera Basilicata 2019 Foundation.
She firmly believes that art in all its forms has a positive impact on society and thus it should be accessible to everybody. She loves challenges, and she decided to return to Italy because she strongly supports Basilicata and Matera as the European Capital of Culture 2019.