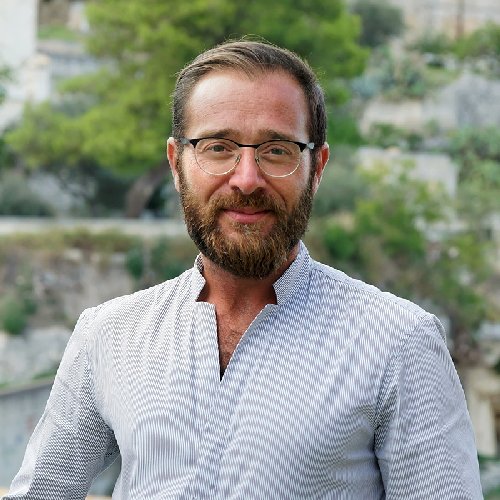 Born in the Vesuvian area, a nomad at heart and with a flair for management, Agostino Riitano tests patterns of urban regeneration through the valorization of the cultural heritage and creative businesses, starting up co-creation processes and social innovation projects. In 2014 he was one of the members of the artistic management team whose objective was the setting up of a cultural programme for the candidacy bid book of Matera as the European Capital of Culture.

He published Sud Innovation – Patrimonio Culturale, Innovazione Sociale e Nuova Cittadinanza (Franco Angeli, Milano), a book about the South of Italy as a laboratory promoting new forms of cultural citizenship and social change. Over the past 10 years he has been the artistic director of Eruzioni Festival, Barock – a trip through Baroque traces, the Festival delle Culture Giovani, Trasparenze Festival: projects dedicated to performing arts, dance, theatre and contemporary music. He dealt with the cultural management of the re-generation project of the neighbourhood Rione Sanità in Naples experimenting with a Mediterranean approach to the design of a smart-city. Inspired by the principle of the “triple bottom line”, in 2014 he worked for setting up the Cultural-Tourist Development Plan of the Dominican Republic that was funded by Banco Interamericano de Desarrollo. He was one of the members of the OECD team to implement the project “ACTORS” that stands for Attrattori Culturali per il Turismo e l’occupazione nelle Regioni del Sud Italia (Cultural Attractors for Tourism and Employment in the Region of the South of Italy). From 2014 to 2015 he was in charge of the staff of the Councillorship of Culture and Tourism of the Municipality of Naples to arrange a strategic policy for culture.   He founded: the Rural Hub, the first Italian haker space favouring the valorization of change makers in rural areas; The Cultural Association Jazzi for the promotion of cultural innovation processes in the hinterland; the Cultural Association Officinae Efesti for the creation and promotion of contemporary art in the Euro-Mediterranean area. He worked as a Professor of project management in the Top Vocational Training Course in Management of Cultural and Environmental heritage at the University Federico II of Naples. Currently, he is one of the members of the faculty of MEMIS - Master in Economics, Management and Social Innovation organized by the University of Rome Tor Vergata and Human Foundation.