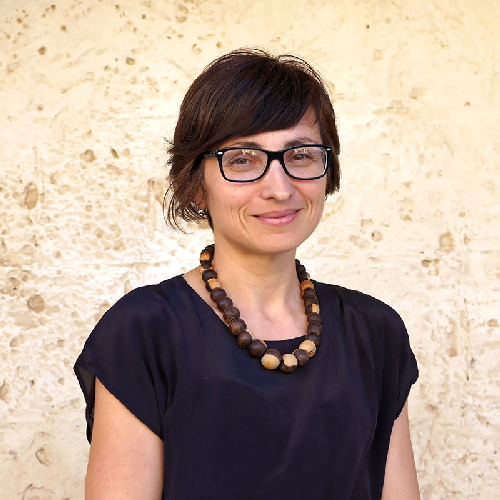 Born in Genoa, Valentina Milano moved at the age of nine with her family to Paterno, a small village in Basilicata. Initially because of her studies and then because of her work, she has lived in several cities in Italy – Pisa, Bologna, Modena, and Milan – and she spent one year in Madrid.

In each place she always sought to be part of a community and to establish links and connections.

In 2004 she graduated in Political Sciences from the University of Pisa specializing in International Politics. In that year she completed a second-level Masters in Social Policies and Management for Sustainable Development of Territory. When she was in Bologna, she collaborated with several associations for the enhancement of marginalized social groups and for the promotion of social cohesion.

In 2008 she moved to Milan for work. The experience in Milan deeply influenced her professional career because she could observe at first hand the latest developments in the third sector and social innovations.

She worked for 8 years on the transformation of the cooperative “La Fabbrica di Olinda” into a social enterprise. Set up with the aim of regenerating the building that had housed the former psychiatric hospital “Paolo Pini” in the northern suburbs of the city, the cooperative had become a symbol of marginalization. The new social enterprise has had a great social and cultural impact thanks to projects like “Cultura e Periferia” and “Le fondamenta degli incurabili – Bando Beni culturali”, which were co-financed and co-produced with Fondazione Cariplo – Culture Area.

Sometimes the group came up with innovative ideas, while at times it had to recognise its own limits. The suburbs can be a hard place to live and think about the future. This work in the suburbs made her reflect more deeply on the concept of suburban area/areas.

Milan, and some other Italian cities, are well ahead in the field of social innovation and sometimes they seem to be darting for the finishing line. Other places, both in the North and in the South, are left behind. Enticed by this idea, in 2016 she decided to come back to Basilicata where she started her frontline work on the issues she feels most involved in - child poverty and education, and the inclusion of migrants in the local community. To this aim she worked with a social-promotion association in the management of the town's  play center and coordinated the project “Italiano per migranti (Italian language for migrants)” at the CAS of Paterno in the province of Potenza.

In the last two years she has continued her studies. She completed the Memis first-level Masters degree (Master in Economics, Management and Social Innovation) at the Economics Faculty of Tor Vergata University of Rome and gained two professional qualifications: ‘ISIPM base: Project manager’ and ‘DITALS I: teaching Italian as a foreign language’.