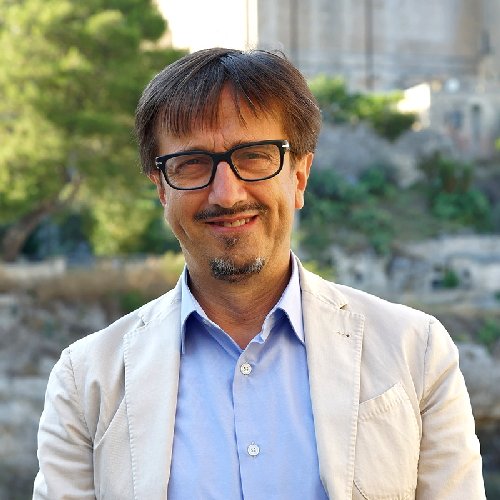 A repentant Jazz guitarist, a musical reviewer and keen on cinema, his main activity is communication. His first experience in a press office was for Ray Charles’s concert held in Matera in 1992. However, at that time he did not yet know that it would be his job.

Graduated in Communication Sciences, he started to work as a journalist in 1991 and he enrolled in the National Register of Journalists in 2001.
He has been working for the Region of Basilicata since 1996 and he is the head of the press office of the Council of the Region of Basilicata. From 2010 to 2015 he was in charge of the institutional communication of the Municipality of Matera and at the same time he was in charge of the press office of the Matera 2019 Committee for the candidacy of Matera as the European Capital of Culture. Thanks to this experience he wrote the book “Le città invincibili – L’esempio di Matera 2019” (Editrice Universosud – 2017).
In 2018 he was appointed as the coordinator of the press office of Matera – Basilicata Foundation 2019by the Director of the Press Office of the Council of the Region of Basilicata.
He is one of the founders and promoters of the national network Pasocial that was set up to enhance the role of public communication in Italy.
Since he put his heart and soul in journalism he has safeguarded workers’ rights with the Press Association of Basilicata, where he was the deputy president for 4 legislatures and president for 2 legislatures, and also in the National Council of the National Press Federation as well as in the general council of Inpgi (The Social security Authority of Italian Journalists) for which he is the trustee on behalf of the Region of Basilicata. His main passions are jazz music and cinema. He was one of the founders of the association Onyx Jazz club and has collaborated with many media outlets, such as, just to mention a few, Frigidaire, Il Manifesto, Avvenimenti, La Gazzetta del Mezzogiorno, Musica Jazz, Blu jazz, TelePiù 3, Rai Radio1, Rai Radio2, Trm, Basilicata settimanale, Prima settimanale.
He is the author of a research project on the relationship between jazz and cinema.He graduated in Communication Sciences with a thesis on the Film Commissions in Italy and Europe. He has integrated his two passions in the production of the documentary on the great saxophone player from Rome Massimo Urbani “’round about Max” and the cd with the same title (Sentemorecords - Bmg).
He holds conferences on cinema, jazz and public communication.