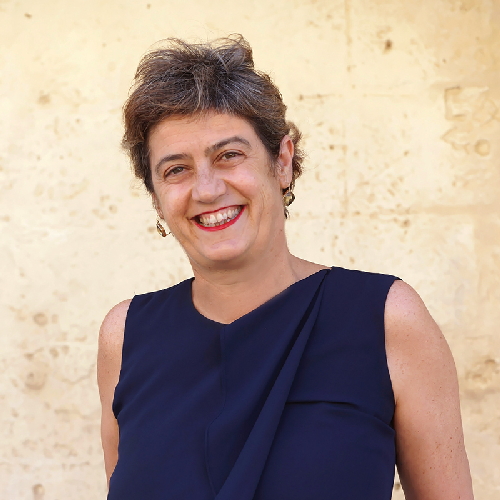 Born in Matera, economist, she is specialized in the design, implementation and evaluation of public policies, with a focus on education, culture and social innovation. She was the Director ad interim of the Foundation Matera-Basilicata 2019 until june 2021.

From 2015, she is the Development and Relations Manager of Matera 2019 Foundation. She develops and runs the pillar projects (Open Design School and I-DEA) and conducts all the activities and projects concerning Citizens involvement. She is responsible as well of the international relations - with a focus Plovdiv 2019-and of coordination of Matera 2019 with public funding and policies. As such, she coordinates all the monitoring and evaluation activities and a draft of the legacy plan.

From 2010 to 2014, she was entrusted by Regione Basilicata to Matera 2019 Committee for the preparation of the bid for the title of ECOC. As Project manager, she defined and ran the pilot projects and residencies aimed to strengthen the EU dimension and to encompass it in the city and citizens dimension, developed all the plans aimed to ensure the budget allocation of the bid book (and of the bidding process as well), ensured a close coordination between the bid strategy and the regional and urban policies, took part in the drafting of the 2 bid books as to the aspects concerning finance, legacy and governance as well as to the 2 interviews with the Selection Panel. In addition, she took care of the preparatory work for the setting up of Matera 2019 Committee and subsequently of Matera-Basilicata 2019 Foundation.

From 2002 to 2014 she worked in in the Public Investment Evaluation Unit of Basilicata Region. Under this post, she drafted Strategic Plans (i.e. Regional Economic and Financial Programmes), conducted evaluation studies on projects and policies, designed and developed pilot projects on local development empowered by creativity (i.e. Visioni Urbane, considered as one of the best practices in cultural policies also because of its emphasis on technology and community approach). In addition, she also took part in twinning experiences with Eastern Countries (Poland, Romania, Bulgaria) and ran a project on archeology and communities involvement in Jordan.

From 1994 to 2001, she worked in Brussels and matured a long experience in running and assessing cooperation programmes with third countries (India, Mediterranean countries) in the cultural and education field. She took part in several monitoring missions on site both in Indian and EU Universities. In addition, she designed and ran a EU project on Museums storytelling and merchandising.
For the European Commission she took part in a number of selection panels of EC projects in the media and cultural sector. She is also the author of several publications (Feasibility studies on tourism and culture; Visioni Urbane; on Open Matera-Open future, published on Symbola Annual Report).
European committed, she had the privilege of being one of the first Erasmus students (1988 University of Louvain la Neuve).